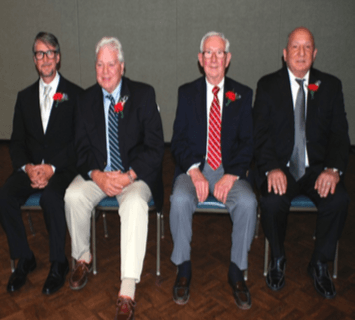 Arlynnwas a pioneer in the development of public libraries In the Greater Cleveland area. She served as Children’s Librarian at the very first Parma Library on Ridge Road and opened the first library in Brooklyn. Arlynn became the regional librarian for Maple Heights and collaborated with architects to convert a former school on Ridge Road into a library. She inspired others to appreciate the role of libraries in the culture of a community.

Bob was a very successful clothier in Minnesota before he co-founded the Tommy Bahama line of loose fitting silks and palm tree graphics designed to promote a relaxed image. They opened restaurants, merging retail with restaurant for eater-entertainment. In loving memory of his wife, Jan, Robert fulfilled her vision of creating the Garden of Hope, a 2.5 acre healing sanctuary for cancer patients located on the campus of the NCH Health Care System in Naples, Florida.

Throughout a lifetime of volunteerism, Gene has given generously of his time, talent, and treasure. Gene has served as treasurer of the PSHS Alumni Association, the Parma City Schools Foundation, and Holy Trinity Church. He developed and maintains the “Principals’ Courtyard” on the grounds of PSHS. Gene supported countless school levies and district projects. He was honored with the “Bailey Bells” award for service to his Alma Mater.

Neil is a world class guitarist, prolific song writer, arranger, producer, and author. He has scored music for television and movies. For more than thirty-five years Neil “Spyder” and his wife, singer Pat Benatar, have been hailed as “the Rock and Roll world’s best love story”. Their hits include “Heart Breaker”, “Hit Me With Your Best Shot”, and “Love Is A Battlefield”. Neil wrote many songs for other artists, i.e. “Jessie’s Girl” for Rick Springfield.

Neil is a very successful businessman and philanthropist. He was awarded the Bronze and Silver Star for heroism in Vietnam. He has been President and owner of Capital Image Inc., a public relations firm, since 1983. Neil has generously supported various charities and worthy causes around the world, including Smile Train, La Paz Mexico Cancer Organization, and numerous animal shelters. Neil annually provides thousands of dollars in scholarships to Parma Senior High School students and challenges other alumni to do the same.

Alan is a star of stage, screen, and television. He performed in Broadway productions of “Biloxi Blues and The Producers”. He had starring roles in the hit series “Spin City” and “Going Places”. Alan has appeared in a multitude of movies with many of Hollywood’s biggest stars. Alan Ruck is likely best known for his role as Cameron Frye, Ferris Beuller’s best friend in the iconic 1986 John Hughes film “Ferris Beuller’s Day Off”.

Joseph’s distinguished career with the Cleveland Police Department spanned forty-three years, culminating in his term as Commander of the Third District.  Commander Sadie had extensive participation in community relations, both public and private sectors, networking people and projects. He was awarded several commendations for bravery, valor, and heroism. He continues his work in support of needy families in the Cleveland area.