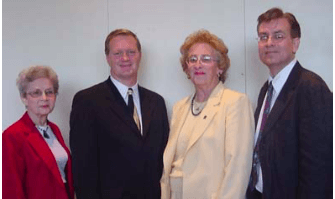 Joe worked with Ohio Bell/America for forty-two years. He served on the Board of Directors of the Telephone Credit Union for thirty-nine years, as President for twenty years. Joe was also a trustee for the Parma Community Hospital for eighteen years, including eleven years as Chairman. In 2002 the Parma Chamber of Commerce honored Joe with the Pride Award in recognition for outstanding service to the community. Joe was also a councilman for the City of Seven Hills.

Kent served on the staff of WVIZ/PBS for thirty-seven years and received Emmy Awards for two programs. He has been involved with the Cleveland Today television show and the Cleveland Health Museum. Kent serves on the advisory board for Hospice of the Western Reserve. He is a Trustee of the Cassidy Theater in Parma Hts. Kent has supported the Parma City Schools and community through his participation on various school committees, Friends of Byers Field, and as chairman of a Parma Schools levy campaign.

Sharon taught English in the Parma School District for thirty-one years, primarily at Parma Senior High where she served many years as senior class advisor. She was deeply involved in educational programs, research on the local and state level, as well as teacher improvement and service programs. Sharon represented Parma Sr. High School in the Coalition of Essential Schools in the capacity of Trustee. She taught classes at Cleveland State University and Notre Dame College.

A graduate of Michigan University, Richard specialized in the field of certified purchasing management. He authored a number of books on procurement.  Richard served as Ad Hoc Advisor to the United States Air Force for Reserve Affairs. He was recalled to a special task force whose function was to return and debrief USAF Prisoners of War in North Vietnam.

Ed owned and managed a service station on Pearl Road during the 1960’s and 70’s. He served as on the Parma Jaycees as treasurer, president, district vice-president, national director, and initiated the first recycling center in Parma. Ed raised money for countless community projects. He supported the Parmadale Children’s Home. He taught vocational education for the Parma City Schools, supervising the construction of an electric automobile by his students. Ed was active in the Parma Chamber of Commerce, serving as president in 2004. Ed represented his constituents of Ward 7 as a Parma City Councilman.

Dr. Tuchak practiced dentistry for thirty-nine years, during which time, he often provided his services free of charge to needy families. He was active with the Medina Schools, where he served as President of the Athletic Boosters for seven years. He was co-chairman of the Muscular Dystrophy Association for fifteen years. Dr. Tuchek served his country as a United States Navy Reservist for twenty-two years.